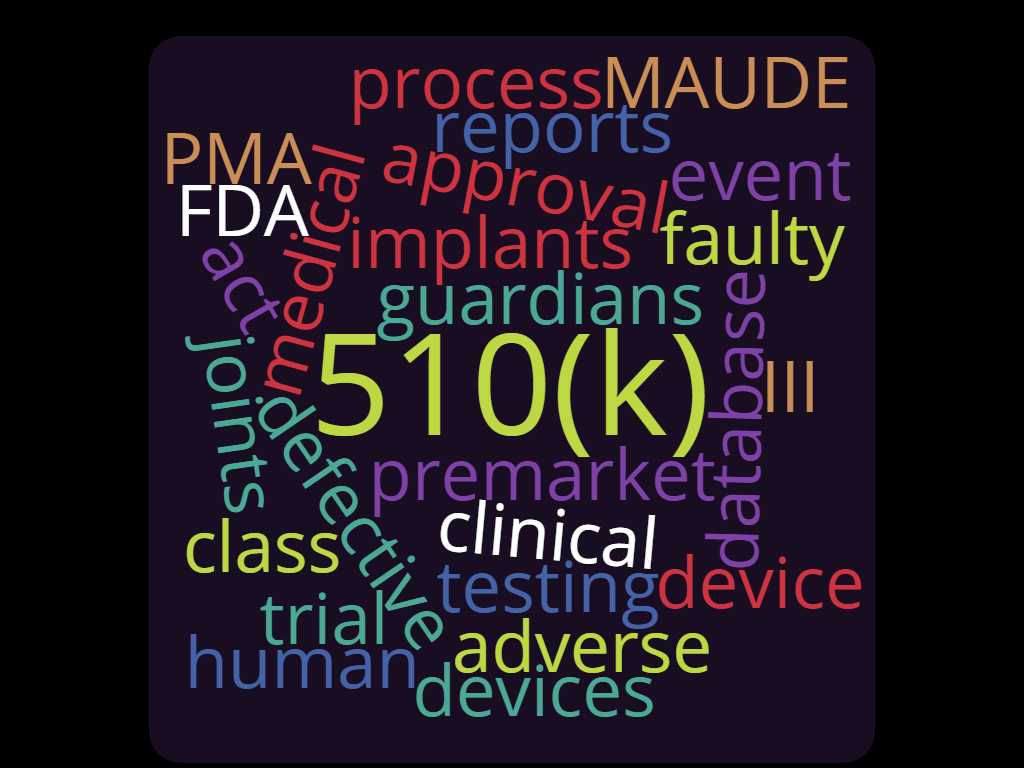 “Do no harm.”  It’s the mantra and credo required of all licensed physicians, but if your doctor has recommended a medical device implant, he or she may unknowingly be causing more harm than good.  Each year, millions of patients are outfitted with a medical device implant to treat some sort of medical condition; surgical mesh for prolapse, metal and plastic ball and socket joints for hip replacements, IVC filters for those at risk of clotting, the list goes on.  Unfortunately, for many of these patients, the results are far from what they expected.  According to Congressman Lloyd Doggett, who recently introduced legislation to increase the transparency of medical device dangers, in 2018, there have been over 27,000 reports of injuries and 111 deaths caused by metal on metal hip implants alone.  And this is just one of the many types of medical devices implanted in patients with increasing frequency each year.

Chances are your medical device implant was never tested on humans.

Unlike the pills you get from your pharmacist, most medical devices do not have to undergo clinical testing on humans before being offered to patients.  Medical devices generally fall into one of three classes (I, II, or III) of FDA review depending on the relative risk to the patient and/or user. Class III devices, such as heart valves, that are used to sustain or support life or have a high risk of serious complications, require the most stringent type of review called a premarket approval or PMA.

A PMA typically requires laboratory and clinical testing on human subjects, which can reveal potential complications that can’t be determined solely through laboratory tests.  However, for lesser classified devices, the FDA only requires a 510(k) premarket notification, for which only laboratory testing is required.  The line between a Class III or Class II classification is often fuzzy.  As a result, many devices that have the potential to cause serious harm to users are streamlined through the 510(k) process, thus allowing manufacturers to bypass the need for human testing.

So how are device manufacturers able to flood the market with medical device implants that are faulty but still cleared by the FDA?  The 510(k) process allows manufacturers with Class I and II devices to receive FDA approval based on lab tests alone so long as they can show that their product is “substantially equivalent” to other “predicate” devices that have been approved by the FDA and are already legally marketed to consumers.  The problem is that one company’s 510(k) application may be based on a substantially equivalent device that ends up being faulty itself.  The effects are magnified when one 510(k) approval is based on a predicate design also approved through the 510(k) process that was based another predicate design, and so on.  The result is an entire lineage of potentially dangerous devices that are FDA approved but based on a defective original design.   For example, one recent study found that 16 percent of the surgical mesh cleared through the 510(k) “substantial equivalence” process and currently being marketed was descended from three specific designs that have been recalled for defects which caused serious adverse results.

What should you do if your doctor is recommending a medical device implant?

A growing number of victims of faulty medical device implants have been speaking out, resulting in a push for tougher laws and regulations to protect patients.  The FDA has also been forced to take note, with then-FDA Commissioner Scott Gottlieb issuing a November 2018 statement on the FDA’s plan to address these shortcomings, including:

While legislative reform, such as the  Medical Device Guardians Act  H.R.2915 proposed by Congressman Doggett, may eventually lead to more transparency surrounding medical device approvals and reported problems, there are no immediate steps in place to protect consumers.

If you are considering a medical device implant, you can search the FDA’s Manufacturer and User Facility Device Experience (MAUDE) database for specific device warnings.  However, because of the tremendous lag between patient reporting and the FDA notifying consumers of potential risks, relying on the MAUDE database may not be enough.   In response to this lag, a former FDA worker designed Device Events, a system that can be used by doctors, insurance companies, and hospitals to identify and track medical devices that may be faulty.  Device Events reports receiving more than 80,000 reports each month on various medical devices.  In any event, you want to be sure to talk to your doctor and fully understand all of the potential benefits and risks associated with the proposed implant before you schedule a procedure.

What should you do if you suspect you’ve been injured by a medical device implant.

Injuries from medical device implants have been known to plague patients with chronic pain, permanently disabling conditions, and even death.  For those looking to take legal action, there is no compensation worthy of all they’ve lost; giving up a long-standing career, missing out on raising their children, or being unable to unable to enjoy the hobbies and activities that used to bring them joy.

Some of the common defective implants known to cause injury include:

Often times potential claims are subject to a statute of limitations (a set number of years you have to file a claim after discovering your injuries). Some victims may qualify for inclusion in a class action lawsuit filed by several persons with the same type of injury, or even be entitled to recovery for damages from a settlement that has already occurred. If you think you’ve been injured from a faulty medical device implant, it’s never too late to reach out to an experienced products liability attorney to assess your potential claims.

Injured by a defective medical device?
‍
Get a FREE case evaluation.

Medical Device Watch is sponsored by Keefe Law Firm. The medical device approval process in the U.S. allows for the sale of some devices that have not been tested in clinical trials on humans. Our goal is to help people protect themselves from the physical, emotional and financial harm that can be caused by medical devices that are defective.